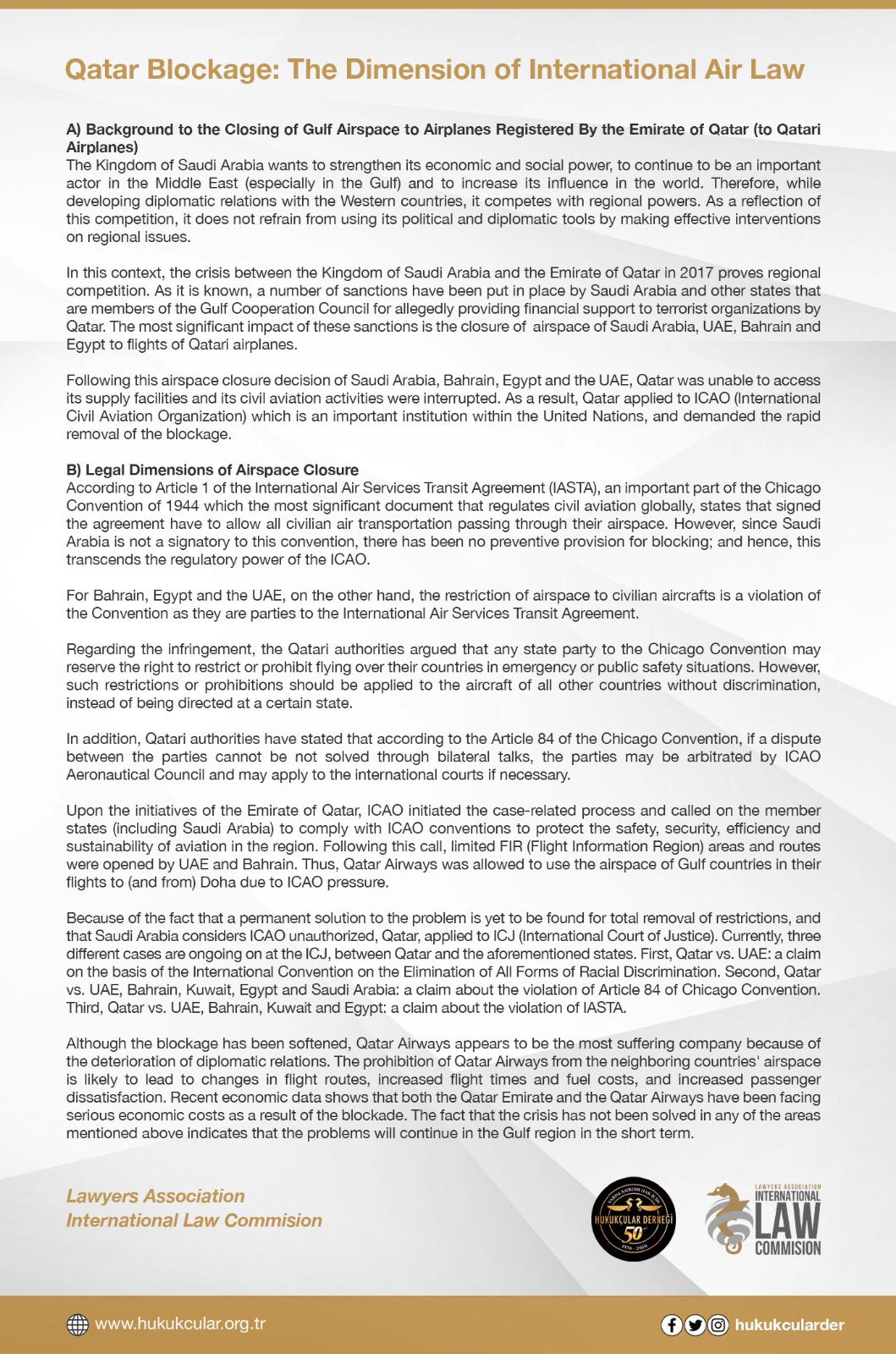 The Kingdom of Saudi Arabia wants to strengthen its economic and social power, to continue to be an important actor in the Middle East (especially in the Gulf) and to increase its influence in the world. Therefore, while developing diplomatic relations with the Western countries, it competes with regional powers. As a reflection of this competition, it does not refrain from using its political and diplomatic tools by making effective interventions on regional issues.

In this context, the crisis between the Kingdom of Saudi Arabia and the Emirate of Qatar in 2017 proves regional competition. As it is known, a number of sanctions have been put in place by Saudi Arabia and other states that are members of the Gulf Cooperation Council for allegedly providing financial support to terrorist organizations by Qatar. The most significant impact of these sanctions is the closure of  airspace of Saudi Arabia, UAE, Bahrain and Egypt to flights of Qatari airplanes.

Following this airspace closure decision of Saudi Arabia, Bahrain, Egypt and the UAE, Qatar was unable to access its supply facilities and its civil aviation activities were interrupted. As a result, Qatar applied to ICAO (International Civil Aviation Organization) which is an important institution within the United Nations, and demanded the rapid removal of the blockage.

B) Legal Dimensions of Airspace Closure

According to Article 1 of the International Air Services Transit Agreement (IASTA), an important part of the Chicago Convention of 1944 which the most significant document that regulates civil aviation globally, states that signed the agreement have to allow all civilian air transportation passing through their airspace. However, since Saudi Arabia is not a signatory to this convention, there has been no preventive provision for blocking; and hence, this transcends the regulatory power of the ICAO.

For Bahrain, Egypt and the UAE, on the other hand, the restriction of airspace to civilian aircrafts is a violation of the Convention as they are parties to the International Air Services Transit Agreement.

Regarding the infringement, the Qatari authorities argued that any state party to the Chicago Convention may reserve the right to restrict or prohibit flying over their countries in emergency or public safety situations. However, such restrictions or prohibitions should be applied to the aircraft of all other countries without discrimination, instead of being directed at a certain state.

In addition, Qatari authorities have stated that according to the Article 84 of the Chicago Convention, if a dispute between the parties cannot be not solved through bilateral talks, the parties may be arbitrated by ICAO Aeronautical Council and may apply to the international courts if necessary.

Upon the initiatives of the Emirate of Qatar, ICAO initiated the case-related process and called on the member states (including Saudi Arabia) to comply with ICAO conventions to protect the safety, security, efficiency and sustainability of aviation in the region. Following this call, limited FIR (Flight Information Region) areas and routes were opened by UAE and Bahrain. Thus, Qatar Airways was allowed to use the airspace of Gulf countries in their flights to (and from) Doha due to ICAO pressure.

Because of the fact that a permanent solution to the problem is yet to be found for total removal of restrictions, and that Saudi Arabia considers ICAO unauthorized, Qatar, applied to ICJ (International Court of Justice). Currently, three different cases are ongoing on at the ICJ, between Qatar and the aforementioned states. First, Qatar vs. UAE: a claim on the basis of the International Convention on the Elimination of All Forms of Racial Discrimination. Second, Qatar vs. UAE, Bahrain, Kuwait, Egypt and Saudi Arabia: a claim about the violation of Article 84 of Chicago Convention. Third, Qatar vs. UAE, Bahrain, Kuwait and Egypt: a claim about the violation of IASTA.

Although the blockage has been softened, Qatar Airways appears to be the most suffering company because of the deterioration of diplomatic relations. The prohibition of Qatar Airways from the neighboring countries’ airspace is likely to lead to changes in flight routes, increased flight times and fuel costs, and increased passenger dissatisfaction. Recent economic data shows that both the Qatar Emirate and the Qatar Airways have been facing serious economic costs as a result of the blockade. The fact that the crisis has not been solved in any of the areas mentioned above indicates that the problems will continue in the Gulf region in the short term.